In a time when marketing is transforming, it’s more important than ever that CMOs stay curious and don’t turn away from all the change demanded from them. 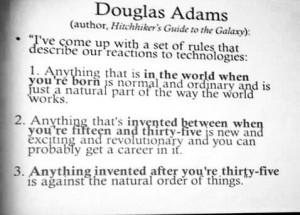 What is the biggest challenge facing CMO’s in 2015? According to a recent survey among Swedish Heads of Marketing it can be boiled down to one word – digital. Their major worries ranged from how to create a working digital strategy to getting messages through the media storm and improving ROI on digital investments (as well as doing more with shrinking budgets).

Now CMO’s comes in all ages, but usually you don’t get there until after you’ve hit 35. Which means that many of them are very competent, very qualified and have gathered a lot of experience. But at the same time they have stopped being curious and stopped learning. It’s a very human thing, and Douglas Adams, author of The Hitch-hikers guide to the galaxy summed it up perfectly in his rules about how we react to technology:

If we apply this to marketing it means that most CMO’s probably deep down feels that things like social media, content marketing, not spending most of your budget and attention on paid media (e.g ads) is deeply unnatural. Hence their problems adapting to a media landscape where the tried and tested methods of the creative revolution from the 60s onwards aren’t working that well anymore.

No wonder they’re having a hard time making digital work.

So what to do if you’re a CMO? If you feel that you’re not getting the desired results from digital, I would suggest recruiting some digital competence. That’s something most organizations would benefit from.

But the main thing is to change your mindset about innovations in marketing, and the technology and behavorial changes that are causing them. Social medie won’t go away, it will continue to develop and change. Content marketing came about because, as Seth Godin put it, “it’s the only marketing that’s left”. With traditional types of paid media decreasing in reach we had to turn to relevant content in our own channels, and primarily the digital ones. Analytics, automation and the Internet of Things are all having an impact as well. And there will be other changes and disruptions in the coming years. None of which will be against any natural order of things.

There has never been a point in your life when innovation and change stopped being relevant. And that point will never come. It’s your job to keep yourself updated and on top of what’s happening. Learning and being curious has always been important, but in your current situation it can mean the difference between success and failure.

You need to stay curious and never, ever stop learning.

Am I saying that you should embrace every new thing? Not at all, that’s called the shiny new toy syndrome, and you want to stay as far away from that as possible. No, this is where your experience and knowledge comes into play. That will help you decide what to go for and what to stay away from. But there is a world of difference between dismissing something because you know it won’t add any value, and doing it because you don’t understand what it is.

You need to balance the experience of a 40 year old with the curiosity of a teenager. That doesn’t sound to hard, now does it?

Of course, everything I’ve said here goes for all of us, not just CMO’s. We can all benefit from keeping our curiosity.

And now I’m curious to hear your thoughts on this

0 kommentarer på Why CMOs have to stay curious