Dark social, social sharing via e-mail, chat, apps like Facebook Messenger or WhatsApp, can represent a large portion of the traffic to your site. This can provide important knowledge about your users. 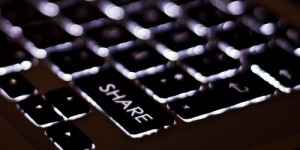 You are probably familiar with Dark Social, but if not here is a brief explanation. Unlike open sharing in social networks like Facebook, LinkedIn, Twitter etc we have the possibility to share via e-mail, chat, apps like Facebook Messenger or WhatsApp and good old texting. This is actually a kind of social sharing that precedes what we now call social media.

The term Dark Social for this type of traffic was coined by Alex Madrigal of The Atlantic in 2012. He was trying to explain direct traffic that comes from sharing links but are not from sources like social media, Reddit, Stumble Upon etc. When he looked at the analytics it showed that more than half of the direct traffic to The Atlantic came from Dark Social.

Together with Chartbeat he later determined that across media sites Dark Social represented close to 70% of all traffic. Last year Madrigal did another study that showed that some of that traffic actually came from Facebook’s mobile app, but a lot ot it still remains.

RadiumOne published a report late last year that added some interesting insights into this. According to them 84% of those surveyed share content online, and 93% of that group shared via Dark Social. But what is really interesting is that RadiumOne found that 32% of those surveyed only shared using Dark Social. All age groups were represented, but the figure increased among older participants, especially +55.

Buzzfeed and USA Today’s sports site For The Win have also reported an increase in WhatsApp traffic and a decline in Twitter sharing. “Over the last six months, total WhatsApp shares have almost doubled while BuzzFeed’s total email, Facebook and Twitter shares have remained relatively flat.” Ben Ronne, Product Lead for Growth and Data, told Will Bancroft recently. You can read Will’s piece here, and you really should.

Why is this important?

Some conclusions and suggestions based on the stats you have seen:

The value of a Dark Social share is in some ways higher than open social sharing. When you do it, it’s because you really want the recipient to look at the link. And the value to the recipient is also higher, we feel special because the link is sent to us, not the world in general. Hence, if your content is shared using Dark Social the users might be more motivated to act.

More importantly, if you have a large portion of Dark Social traffic it can indicate that you have a lot of visitors in their 50s and upwards. Or from a demographic that is very interested in a particular subject, but less inclined towards social media in general (the FTW audience could fit that description). If you are in B2B it can indicate that your target audience doesn’t use open social media during working hours or at all, yet want to share interesting links with their colleagues or network.

So what can you do?

You can make Dark Social sharing easier by having share buttons for e-mail and perhaps for WhatsApp as well. This is something you really can experiment with.

Also, by digging deeper into your analytics you can find out more about what content generates Dark Social traffic, and by creating similar content you can verify if the traffic remains intact. You can also work with other tools, to track individual links or sharing in general to find out more.

What’s your take on Dark Social?