If your job is to create content on complex issues you can learn from John Oliver. He did a masterful job of reducing a very complicated issue to something everyone could understand. 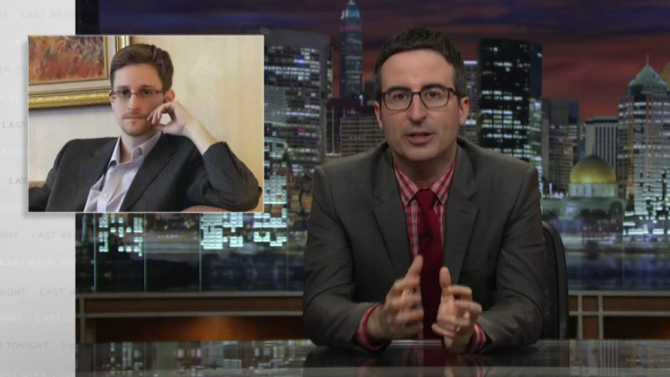 One of the hardest things to do in content marketing is getting your message across when you are working with complex solutions that only a small group of people really understands or cares about. On Last Week Tonight John Oliver tackled a very complex and hotly debated issue – that of government surveillance. And he did it in a fashion that can teach anyone working with content marketing a lot about how to get your message across to a target audience that frankly doesn’t really care about the topic.

Here is the full episode. Go ahead and watch it, I’ll wait (but if you don’t want to, read on, you’ll be able to follow my reasoning anyway):

Before I get into the specifics let me just say this – those of you reading this probably holds a wide variety of opinions on surveillance, Edward Snowden, and indeed of John Oliver himself. I’m not writing this to get into any of that, I’m doing it because I believe we can all learn from how Last Week Tonight tackled a complex issue.

Complexity is a challenge

If you work with content marketing, especially in B2B, you are often faced with the challenge of communicating very complex matters to a target audience that includes both those that understand the topic and those that doesn’t. There are probably also a range of opinions on whether the topic is interesting or boring. But it’s your job to find a way to communicate with all of the people in the target audience, no matter if they understand the issues or not, no matter if they find them boring or not.

The reason for this is that most decisions in B2B are made by a group, and that group will consist of both those that have a direct interest in an area and those that doesn’t. At times it may even be that the person or group most knowledgeable about a subject are not even in the room when the decision is made.

A simple example might be a company investing in new software. The people that will be working with the software might be influencers in the decision making process, the CIO might be a key player in the decision, but the real power might rest with a sourcing department, or the CFO or indeed the CEO. And the only people that fully understand or even care about the features of the program are the ones working with it, and at best they are influencers.

So the challenge for a content marketer is to come up with ways of making the software interesting to the sourcing department, the CFO and the CEO. And that requires understanding what they actually do find interesting and perhaps what they see as a problem or an opportunity.

Now back to John Oliver and Last Week Tonight. Like I said, they tackled a very complex and hotly debated issue, and even went all the way to Moscow to interview Edward Snowden. What they also showed very clearly was that a lot of people don’ t understand the issues at all, and in all honesty don’t really care about it. In that one episode we heard from people that are extremely passionate about the subject of surveillance, like Snowden himself, all the way to people that had obviously no interest in the topic whatsoever and had no idea who Snowden was.

So Last Week Tonight tried to find a way of explaining the issue in a way that those not interested could relate to. And they found it by taking an activity that a lot of people have done one or more times in their lives – sent information of a very personal nature via e-mail, text or other ways. What they did in actual fact was to reduce it to a very specific act, that of sending revealing pictures, and a lot of people can relate to that too. But even if you have never done that, you have probably done something fairly close to it at one time or another, and therefore you could relate to it.

When they did this suddenly a lot of the people that had earlier expressed no knowledge and/or lack of interest in the topic of surveillance suddenly showed a whole different level of engagement and interest. Because suddenly they could relate the whole thing to themselves and their own lives.

And this is the takeaway to all of us working with content marketing. To find a way of expressing our product, solution, concept or whatever it is in a way that people can relate to their own lives and their own circumstances.

How to do it

Last Week Tonight did it brilliantly by boiling it down to a very simple act, and getting people to connect with that situation. We should try something similar. Because often we focus on either those that already understand what we are talking about, or the people that at least find it interesting. But the likelihood that we have to convince people that neither understand the topic nor care about it at all is very high.

This is a reality that faces a lot of companies, either because their offerings are understood by a only a small group of people, or because they work in areas that are considered boring by a lot of people. Sometimes it both. And in order to get across they need to reach a broader group with a message that connects with the everyday lives of that group.

John Oliver started from a very simple premise, and got a lot of people interested because of that. They could understand what he was talking about. If you do the same you will have created a foundation to build on, to which you can add more information while still retaining the interest.

This is the key take away – don’t go complex at once, start simple and build from there.

One company who has done this very well in recent years is GE (and just for the record, I’m not saying that their products are boring or of little interest). And they have often started by taking a complex issue and addressing it with a lot of humor and great storytelling. Like this example from their Datalandia series:

So what’s your take on how to communicate complex solutions or products to a target audience that not only consists of experts in the area? Did Last Week Tonight do a good job?