Still not convinced about Content Marketing? Or do you need to convince someone else? Let’s try an old story. Let me tell you about Hansel and Gretel and the wicked witches who were causing them all sorts of trouble. Are you sitting comfortably? Then we’ll begin. 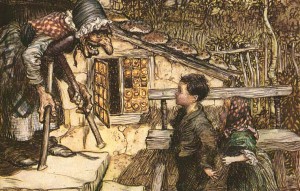 Once upon a time…

… there was a brother and a sister called Hansel and Gretel. They lived in a small village near a large, dark forest.

Now, Hansel and Gretel were very poor. But life would still have been good if not for all the witches who lived in the forest. They were constantly trying to snatch children from the village.

The villagers had tried everything to make the witches stop. They put up big signs, they ran ads on the radio and television, and even used banners on local websites (and you know how desperate that is).

But one day Hansel and Gretel came up with an idea. No one had ever tried to find out why the witches were snatching children. All the efforts had gone into getting them to stop.

So Hansel and Gretel did some research. They read everything they could find on witches, and visited their special scary forums. They even hung out on the biggest social network for witches – Witcher.

What they found out was astonishing. Witches needed children for a very simple reason – to survive. But what they didn’t know was that the thing they needed – a special substance called innocentia – could be found in ordinary almonds.

Hansel and Gretel decided to try something new. Instead of ads, banners and signs they created content that was really useful to witches, that helped them solve everyday problems (witches have a lot of those). And in every piece of content they also mentioned that almonds contained innocentia.

They started out with small nuggets of content, filled with useful tips and tricks, and easy for a stressed modern witch to engage with. Short articles, infographics and film clips.

Hansel and Gretel put a lot of effort into distribution. They made sure their content was shared on Witcher, available in the scary forums, and they even did a direct mail campaign – not all witches are into digital.

They added more in-depth content – case studies, white papers, webinars – with even more useful information. And of course, a lot of it was about how easy it would be to switch from snacking on kids to just eating a handful of almonds.

Hansel and Gretel worked away with their content, tweaking, sharing and trying out new ways to reach the witches. And little by little their work paid off.

The talk on Witcher and in the forums was all about almonds, and how great it would be not having to trick kids with candy. In particular they liked the idea of all the money they could save on not having to build entire houses made out of gingerbread.

Slowly the attacks on kids came to an end. There were still some die-hard, old fashioned witches that refused to change, but most of the witches had changed to almonds.

The kids in the village even started to play outside again. Hansel and Gretel were praised by the village elders for the astonishing ROI they had achieved. This meant that the village wouldn’t have to pay for all those TV and radio ads anymore.

Hansel and Gretel lived happily ever after. In fact they became very, very rich. They started an e-commerce site targeting witches, with a great selection of almonds, black cats and pointy hats.

I’ve also turned this fairy-tale into a slide show, here you go:

This was originally posted on LinkedIn in March, 2015