How many headlines like “Content is king”, “Context is king” or “If Content is king, something else is queen” have you seen in recent months? Quite a few, right? Personally, I’m getting rather tired of seeing them. And for a very simple reason – headlines like that tries to offer a quick and easy solution to something that’s actually quite complex. This is also known as looking for a silver bullet, and if you’re doing that please stop at once.

What the “So and so is king” thinking ignores is that one thing and one thing only will never bring success. But there is always someone who will believe that it’s true and start working from an assumption like “Content is king – if I get my content right everything will fall into place” and then fails miserably.

You can have the best content in the world, but if you don’t opimize if for search and have a detailed plan for distribution in place it’s not going to do anything for you. So in that sense content is king only as long as SEO and Distribution are given equal powers.

Then again, if you believe that Context is King, i.e that how and when our users interact with the content is key, you’re in for a disappointment. Not because context isn’t important, it really is, but because you need quality content, optimized and distributed correctly, to get users to engage with you in the first place. The same goes for those that argue that “Community is King” – without content, context, optimization and distribution there will be no community around to talk to.

We went through this silver bullet thinking with social media some years ago, and probably with websites, magazines and the printing press before that. Very likely there was a heated argument going on in caves a long, long time ago with some of our ancestors arguing that “Cave painting is King” while others claimed that “Sacrifice is King” and guess what, they were both wrong even back then.

Working with communication, marketing and so on, we have to be able to understand the complexities of what we do. We have to understand that there is no one thing that reigns supreme – rather, to borrow from Michael Porter – the strenght lies in the value chain, the combination of a number of factors. Content, context, community, SEO, planning and distribution are all important. If we create a strategy that includes all these elements we will have a much better chance of successfully reaching and interacting with our target audience. 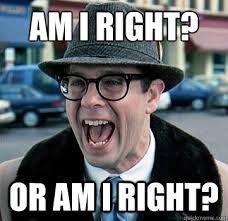 0 kommentarer på Enough with the “Content is king” crap!